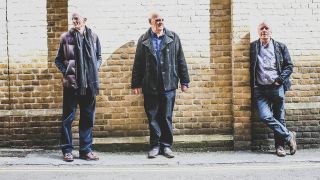 Van der Graaf Generator have announced that they’ll tour across the UK in 2020.

The band have lined up a total of five shows, getting under way at the Queen’s Hall in Edinburgh on May 3 and wrapping up with a performance at The Palladium in London on May 8.

Peter Hammill says: “Here we are again, then. Fifty years after the release of The Least We Can Do Is Wave To Each Other. How exciting – and daunting – it is to once again step out into the glorious chaos of Van der Graaf Generator’s live performance. Yes!"

Hugh Banton adds: “It’s time once more to hang up my progressive techie lab-coat and entice the progressive organist back to his seat, stage left.

Guy Evans says: “OK, so the melting drum kit at the last Van der Graaf Generator soundcheck did cue pause for thought. Thankfully both it and yer sticksman have re-solidified. I'm so very up for this!”

Tickets for the tour will go on sale this coming Friday (September 27) from 10am.