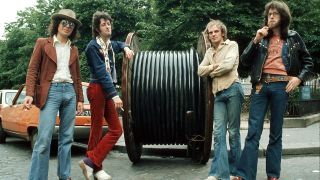 The dark matter in the progressive rock universe, Van der Graaf Generator’s music is complex and challenging. Splitting twice in the ‘70s, their 2005 reformation showed them to be one of the very few bands whose new work is every bit as bracing as their past as these ten tracks prove.

Honouring Hammill’s ex-flatmates Mike McClean and actress Susan Penhaligon in the lyrics, pastoral flute, wistful cello and the hymnal chord progression finds VdGG in a restrained and reflective mood in a ballad to golden summers gone and the encroaching autumn of life. Warmly optimistic and only slightly sentimental, it’s gorgeous.

Producer John Anthony doesn’t receive enough praise for his work with ‘70s VdGG. Tasked with realising some of their sonically extreme ideas, his disconcerting treatments and production on the vocals, David Jackson’s sax and oppressive atmospherics, brilliantly evokes the unsettling plight of the titular pioneers stranded beyond time and space.

Heavy, doom-laden riffs were highly sought-after in the early ‘70s and this was one of the best. A highlight in their live shows, heads and hair would gyrate wildly from its opening hook to the lashing, demented final bar. Hugh Banton’s brimstone-steeped keyboards shows just how fearsome VdGG’s bite could be.

Following David Jackson’s abrupt departure, VdGG demonstrate their grasp of long-form pieces remains as effective as ever. Though their interlocking, mathematically-inclined keyboard excursions still erupt and spill, such deliberate disorientation is off-set with an increased use of space and succinctness, a sign of their growing confidence in their three-piece formation.

Now approaching their seventies, there’s been hints that Do Not Disturb could be their final studio album. Corralled by Evans’ pensive swing and Banton’s keyboards, by turns vaporous and barbed, Hammill’s perceptive lyrics retain their trademark acuity. Showing no signs of going gently into that good night, their uncompromising musical vision remains intact.

A defining characteristic of VdGG is their ability to harness a song’s dynamics as a extra musical force. Moving from a cloistered close-mic confessional with the dark, insinuating undertow of Banton’s organ, it opens out onto full-on, ragged, breast-beating rage, graphically dramatising a bleak meditation on the curse of immortality.

From their triumphant return with Present, what is in effect a protest song skewers politicians’ post-truth rhetoric and the reality of deeds, raging against the lure of the populist demagogue and our failure to learn from history. If ever there was a cautionary anthem for our times, this is it.

Brimming with dissonant chords, oppressive industrial thrumming, violently clashing forces and anguished shrieks, VdGG’s starkly-lit account of a dystopian society hell-bent on self-destruction, is meshed in towering, claustrophobic layers. A masterful, bravura production, as the smoke clears, Hammill’s final words hint that a sliver of hope may yet be grasped.

Any track from their 70s comeback, Godbluff, would count as a classic but this one just tiptoes ahead. In a piece replete with sonic details, Guy Evans’ drumming and percussion is outstanding. Not only expertly marshaling dramatic tension, he adds a tonal muscularity mixed with a wry humour along the way.

A remarkable feat of tape editing as much as songwriting, questions of existential dread, alienation and mortality are fed into the quartet’s musical machinery resulting in a multifaceted, kaleidoscopic masterpiece. The anthemic closing solo, commonly assumed to be Robert Fripp who guests on the album, comes from organist Hugh Banton.