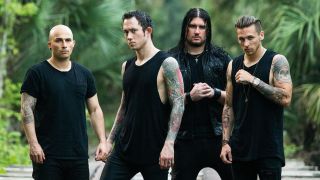 Trivium will reissue their hard-to-find 2003 debut album, Ember To Inferno on December 2.

The Florida band’s first record has been out of print for several years. Now it’s to be re-released – alongside a deluxe version which includes 13 additional early versions of songs which were previously unavailable.

Vocalist and guitarist Matt Heafy says: “The purpose of this release is to show the very early beginnings of Trivium – perhaps an era unbeknownst to most listeners of the band. To look back at Ember as the starting point of Trivium becoming recognised worldwide is a staggering thought for me, considering I was 16⁄17 years old during the writing and recording of the record.

“As a kid, I always said the ‘goal’ was to be in a massive metal band. I don’t think I actually knew what it would mean to have fans in different parts of the world, and I still can’t believe people care so much that they actually want to hear the music that pre-dates our years with Roadrunner Records.

“To this day, I am still completely blown away that people are singing words to songs I wrote when I was 16 years old. It’s an amazing feeling.”

Ember To Inferno is available on standard or deluxe CD and vinyl – with the deluxe 5-LP box set versions containing bonus discs Ruber, Caeruleus and Flavus. They can be pre-ordered via Trivium’s website.

The artwork and tracklist can be viewed below.

Trivium are currently touring the US in support of 2015 album Silence In The Snow, with a European tour planned for next year.

Every Trivium album ranked from worst to best