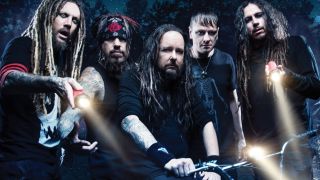 Hey everyone! It’s the Metal Hammer Halloween spooktacular! And who better to be on the cover than the mighty Korn! They’re one of the biggest metal bands in the world and are just about to release one of the stand-out metal albums of 2016, but where have they come from and how did they get here? In the new issue of Metal Hammer we dig deep into the band’s twisted psyche and confront their dark past in their most revealing interview yet.

The new issue of Metal Hammer is available to order now, and comes with a FREE 15-track CD featuring Korn, Meshuggah, The Dillinger Escape Plan, Opeth and Alter Bridge!

From the departure of Head to Munky’s battles with substance abuse to Jonathan’s eventful evening puking with rubber dicks – you don’t want to miss this in-depth, no holds barred interview with the band that changed heavy music forever.

Halloween is just around the corner and as metalheads we love a bloody horror flick. From The Evil Dead to The Exorcist to Hellraiser, there is so much joy to be found in blood-spattered violence and monstrous mayhem… but why is metal so close to horror culture? Kirk Hammett, Dani Filth, Corey Taylor, Ash Costello and more reveal their love and connection to things that go bump in the night.

Opeth’s new album Sorceress might be seen as a thing of beauty, but its creation was wrought in pain and anguish. Following the collapse of Mikael Akerfeldt’s marriage, he laid his soul bare for all to see on the latest record, and in the new issue the frontman opens up to Metal Hammer about the agonies of love and rebuilding his life.

After an almost 20-year career of destroying stages and each other, The Dillinger Escape Plan are finally hanging up their blood-stained boots. But why now? Ben and Greg go into detail about the band’s implosion, their real feelings towards each other and why they no longer need the TDEP to survive.

If you know anything about Nightwish, it’s probably their landmark single Nemo; the song that transformed the symphonic Finns into global superstars seemingly overnight. Here, as the band celebrate their 20th anniversary, mastermind Tuomas Holopainen and original vocalist Tarja Turunen reflect on the impact, the creation of a masterpiece, and the pressure it brought to their lives.

Our Halloween issue is in stores NOW! And is available to order online right this second!

You can also instantly read the articles from issue 289 of Metal Hammer and dive into the back issues right now on TeamRock+. And experience the interactive digital edition for your iPhone and iPad or Android device.