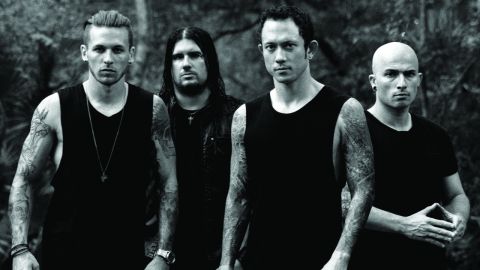 Let’s be honest, “heavy metal band makes heavy metal record” might not seem like much of a headline, but the mixed response to the release of the title track from Trivium’s seventh album suggests that plenty of fans are not overly delighted with the band’s decision to enthusiastically embrace the influence of Dio, Priest and Maiden.

Ushered in via a suitably epic orchestral intro courtesy of Matt Heafy’s pal Ihsahn, Silence…’s unapologetic power metal grandeur is a bold statement for a band that have certainly benefitted from an erroneous association with metalcore, albeit one that never made much sense in musical terms.

Ultimately, if you regard ‘traditional metal’ as a pejorative term then this song is clearly not for you, but what follows it is simply an assured consolidation of musical values that Trivium have been pursuing for some time. From Dead And Gone’s churning Dime-like groove to The Ghost That’s Haunting You’s irresistible, surging chorus and on to Breathe In The Flames’ euphoric Metallica-isms, this is an album of giant melodic refrains, scything riffs and dazzling six-string showmanship; Matt Heafy’s frequently startling vocal performance providing the icing on the steel-plated cake. Frankly, Trivium haven’t sounded this focused or convincing since Ascendancy, but opinion will be divided regardless.