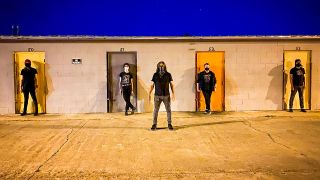 Alt.proggers ...And You Will Know Us By The Trail Of Dead have announced three exclusive live streams this summer, including a 7th August set starting at 8pm UK/9pm CET, geared especially for the UK & Europe.

With touring currently not an option, the live streams will present a unique one-hour set each week built around requests by fans for a handful of tracks rarely played live if at all and of course some classic live favourites to round out the sets. The live streamed shows will begin with the July 31st US Live Set at 8pm CST, followed by the August 7th UK/EU Live Set at 8pm GMT +1 and culminating with the August 14th In the Studio set at 8pm CST.

For the July 31st livestream, Trail of Dead is donating 20% of ticket sales to the venues they played and were set to play in 2020 in the US. They’ve also created exclusive merchandise for the event that will become available that same day. For the August 14th livestream, 20% of proceeds are going toward select US independent record stores including all 34 in the Coalition of Independent Music Stores along with several AIMS stores, namely End Of An Era in Austin, TX, Luna Music in Indianapolis, IN, Young Ones in Kutztown, PA and Daddy Kool in St. Petersburg, FL.

The first two of these performances will be in conjunction with Safehouse in Austin, who have been hosting local livestreams for the past four years, well before the end of the world as we know it happened. In keeping with the strangeness of our current global zeitgeist they will be performing in the same space they’ve been holding rehearsals, to give our fans an intimate glimpse into their current reality.

The third and final set in the series will be performed on the sound stage of the Mosaic Sound Collective, the same location where ...Trail of Dead recorded their last album X: The Godless Void And Other Stories.

"The Mosaic is a non-profit known as an important creative focus in the Austin area, having hosted many symposiums and workshops for people in the entertainment, performance and production world," say the band. "With the launch of a new streaming venue the Mosaic continues to be an important creative hub of the band’s community, and ...Trail are very proud to be taking part in the first round of these. This performance will be engineered by the album’s producer and technical mastermind Charles Godfrey".