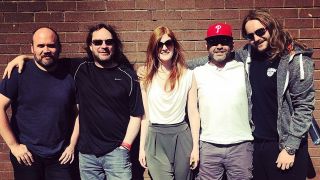 Touchstone are excited to announce that, after a year off, they will return to play London's Garage on May 9, 2020.

Touchstone took a year off due to various personal reasons following their performance at Trinity II in 2018. Their return will also see Paul 'Moo' Moorghen once again joining them on bass and vocals.

Moo says: “Following some hilarious phone calls with Adam, as he informed me he had booked a gig, I asked him for more details including the venue and who was joining the band, to which he replied, ‘It’s at The Garage and we want you…’ so how could I refuse? I am already looking forward to playing my bogey venue and getting blisters on my fingers!”

Touchstone will also release a new single, Stolen Moments, on December 10. It will feature all of the band members (Adam Hodgson, Henry Rogers, Moo Bass, Liam Holmes and Hayley Griffiths), with lyrics written by Aggie Nieszka, and it will be produced by John Mitchell.

Guitarist Adam Hodgson says: “So happy and excited to have all of us back together for the recording and 2020 show, it’s gonna rock! My phone calls with Moo will be transcribed and released one day… they make hilarious reading, but we may end up in court!”

Tickets for the London show will cost £20 in advance and £25 on the door. Advance tickets are available now.