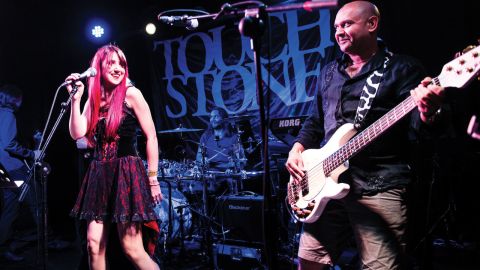 Suffering a serious throat infection, it was doubtful whether Seviour would be able to sing at all, and both send-off gigs were almost pulled. However, the show goes on courtesy of a rather special guest. So it is that Seviour is joined on stage by the redoubtable Heather Findlay, and between them they are visions of smiling, animated, sparkling black and crimson.

An intro segues into the double header of Discordant Dreams and The Beggar’s Song – rumbling Moo bass and keyboards being standout elements of this opening gambit. Findlay has had barely 12 hours to prepare, yet seems relaxed, tambourine in hand, helping out mainly with higher notes and choruses.

Set-wise, protecting Seviour’s voice and paying respects to their rock/prog/pop/folk/metal back-catalogue must have been problematic. A couple of slower, sparser moments are provided by Spirit Of The Age, Seviour accompanying its climax with full-on metal horns, and Contact (“A song about romance”). There’s also the early pre-Seviour ditty The Mad Hatter’s Song (“This was one of the songs I auditioned with”), with Rob Cottingham on lead vocals, as Seviour digs deep to hit some rather impressive notes towards the end. A plea to an obliging audience to help her out, and the band roll out one of their big hits, the guitar and drum propelled hard-edged prog-pop singalong of Strange Days.

Jeremy Irons’ (sadly not here in person) stentorian tones herald the encores, and presage the epic Wintercoast, with a guitar-tastic solo from Adam Hodgson. Seviour admits how sad she feels and thanks “everyone for everything”. The approaching final hurrah, and a return to the stage of John Mitchell prompt an upsurge in energy. There can only be one closing track, as Mad World is given the Touchstone treatment with Mitchell, Hodgson and Cottingham all taking solos.

This wasn’t a note or sound perfect set, with a puzzlingly low mix on Findlay’s voice at times, but it’s immaterial for the Touchstone faithful here, who got one (almost) last chance to celebrate a beloved band’s nine years of music making. The band takes a bow, and some leave teary eyed, wondering what the future holds for all of tonight’s participants.