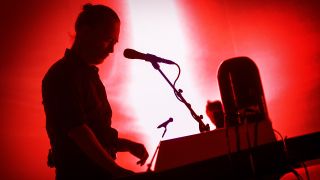 Thom Yorke has announced he’ll head out on the road with his Tomorrow’s Modern Boxes project next year.

The Radiohead frontman is joined in the lineup by Nigel Godrich and visual artist Tarik Barr, with the run of 11 shows getting under way at the SEC in Glasgow on June 19 and wrapping up with a performance at Berlin’s Max Schmeling Halle on July 13.

The tour includes the previously confirmed sets at Poland’s Open’er Festival and at the Roskilde Festival, Denmark.

The trio will play songs from throughout Yorke’s career including The Eraser, Tomorrow’s Modern Boxes, Atoms For Peace’s Amok, Suspiria and Anima, which was released in June this year.

Tickets will go on sale this coming Friday (October 18).

To coincide with the launch of Anima, a “one reeler” film also titled Anima was made available on Netflix. The film was created by Paul Thomas and features three tracks from the record.

Yorke is currently on tour across North America, with his next date set to take place at Berkeley’s Greek Theatre, California, on October 18.