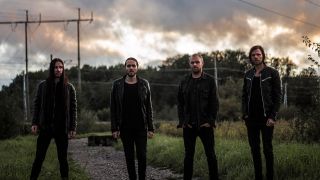 Thenighttimeproject have premiered their brand new single Embers with Prog. You can listen to the stream below. Embers is taken from the band's second album Pale Season which is released on June 28 through Debemur Mortir Productions.

"In late 2017 Fredrik approached me asking if I knew any great vocalists," guitarist Alexander Backlund tells Prog. "I'm no George Michael, but Tobias has a very similar vocal range to mine and I figured my voice could be a good fit for the band. He mentioned some new songs were in the works, and Embers — or The Cat, which was the working title — was the first one he sent me to grace with my beautiful baritone.

"The lyrics are about reconciling with the fact that as we age, we become different people. We have to let our experiences shape us, and hopefully learn from our mistakes. We can't cling to who we were, neither for comfort nor pride. Identity is a fleeting concept, and expecting it to be a constant is naïve — in yourself as well as in other people. We can't keep all the fires burning through the long night that is our lives.”

Embers can be pre-ordered here for Europe and here for the United States.