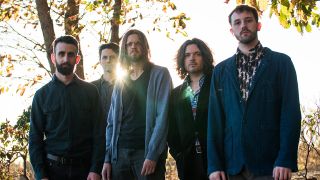 The New Jersey proggers have the new album available for preorder now. Pre orders come with a limited edition CD with 6 panel fold out including lyrics and original art, a 11x17 poster signed by the band, a high quality digital copy of the album 2 weeks before it's release, a special bonus track, a hand drawn piece of art from lead singer Dan McGowan and a special promo code for 25% off your next Tea Club purchase.

Pre-orders for If/When are available from the band's bandcamp page.