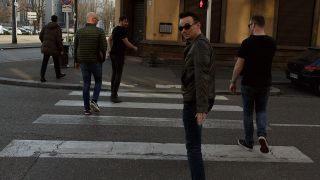 The Pineapple Thief have released a video for their brand new single Break It All.  It's the latest track to be taken from their upcoming album Versions Of The Truth, out on September 4 via Kscope.

“One of the darker, more sinister tracks from the album, Break it All attempts to make sense of narcissistic destruction and the fallout”, explains frontman Bruce Soord. “I remember this song developed really quickly, with Gavin (Harrison) firing back new ideas that sent me off in all kinds of directions. We seem to have developed our shared musical understanding even further with this album. Sometimes I listen back and wonder where on earth it all came from.”

The new video has been directed by George Laycock and produced by Blacktide Phonic/Visual, which sees the band trapped in a maze designed by Adrian Fisher with shots of the band interspersed with surreal patterns emerging from the darkness.

“George wanted to shoot in the maze at night, which would have been simple had it not been the week after the summer solstice," says Soord. "So we had to wait until about 11pm before it was dark enough to shoot. We were really lucky to be able to use Adrian Fisher's maze in his garden. Adrian is 'the world's leading maze designer' and a lovely guy to boot. He was more than happy to see me and the crew running around it in the dead of night. The maze ties in perfectly with the album artwork and the overall concept. We also got to shoot the whole band (socially distanced of course!). It was really nice to do something together after so long apart.”