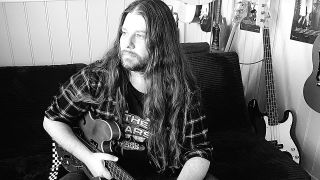 The Opium Cartel have premiered their video for their brand new single In The Streets with Prog. The track is taken from the band's upcoming album Valor, which is to be released through Apollon records in June. You can watch the video in full below.

The Opium Cartel is the art rock/pop side project from White Willow's Jacob Holm-Lupo and Valor is their third full-length release.

"It's a record about naïve but brave dreams," Lupo tells Prog. "These are songs about the hubris and optimism of childhood and youth. That period of life where everything seems sure to happen just the way you imagine: You will fall in love with the most beautiful girl in the world and she will love you back. You will become a pilot or an astronaut or defy gravity in some other way. You will explode into a world of colour and wonder. You will never be disappointed or let down. You will take every risk without fear of failure.

"Musically the album takes inspiration from a variety of predominantly 80s sources, from The Blue Nile and Shriekback, via late Roxy Music to the prog-pop of 80s Alan Parsons Project and Camel. The period feel is amplified by Holm-Lupo’s use of exclusively hardware synthesizers iconic to the era, like the Oberheim Matrix-6 and Yamaha DX7."