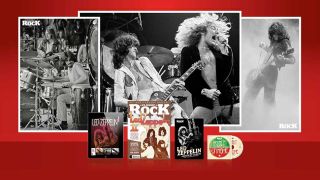 In 2019, Led Zeppelin II – the record that gave us Whole Lotta Love, Heartbreaker, What Is And What Should Never Be, Ramble On and more! – celebrates its 50th birthday. So this issue we chronicle the making of this game-changing album.

We also collar Sammy Hagar for the Classic Rock Interview, go on the road with Steve Hackett, stay angry with Skunk Anansie, run-down the 50 Blues Rock Songs You Should Hear Before You Die and so much more.

Led Zeppelin
Recorded all over the place, amid all sorts of off-stage shenanigans that would become the stuff of legend, Led Zeppelin’s second album turned the rock heirs into its kings.

50 Blues-Rock Songs You Must Hear Before You Die
Following on from our Zeppelin cover story, we pick 50 blues-rock tracks by other artists that every rock lover should hear, from classics to less obvious choices and overlooked gems.

Sammy Hagar
At the age of 71, he can look back on an extraordinarily successful life in music and outside music, and today he reckons he still has “more fun than anybody on the planet”.

Tyler Bryant & The Shakedown
They’re one of the hottest new rock’n’roll prospects, and the most in-demand support act among rock’s A-listers. But what have they learned along the way?

Savoy Brown
With almost 60 ex-members and 40 albums, they were the British blues-rock band that found success in America.

Skunk Anansie
Twenty-five years ago they hurtled into the spotlight, mixing rock guitars with punk attitude and one of their generation’s most compelling lead singers. This is their story.

Steve Hackett
The guitarist played on Genesis’s greatest albums, yet off stage he was mostly in the shadows. Now he’s touring; playing some of those songs, and having the time of his life.

Richard Jobson
Punk singer, TV presenter, author, film director… What has he learned since starting out as the Skids frontman in the 70s?

Rosalie Cunningham
She was the mastermind of lavish psychedelic revivalists Purson – with all the drugs, partying and trials that came with it. Now, with her solo debut, she’s just hungry for the music.

What's on the CD?

Bring It On Home
Presenting 12 smokin’-hot tracks from the best new bands you need in your life, from home-grown heroes to globetrotting stars of tomorrow, including Scarlet Rebels, Voodoo Vegas, Silvervoid, Mother Vulture and more.

Raw Power
Get a classic cabinet arcade game in your living room for less than the cost of a cheap flight to Benidorm.

The Stories Behind The Songs: Live
A big-guitar track with wilfully ambiguous lyrics, I Alone played a crucial part in bringing the band worldwide success.

Six Things You Need To Know About… Black Futures
Acquaint yourself with the London duo whose post-apocalyptic party is “a safe place for oddballs”.

Buyer’s Guide: Anathema
Heirs to classic Pink Floyd? Check out the Liverpudlians’ unique, commanding catalogue and decide for yourself.

Live Previews
Must-see gigs from Scorpions, Caravan and Trevor Horn. Plus full gig listings – find out who’s playing where and when.

The Soundtrack Of My Life: David Duchovny
The actor and musician talks about the special records, artists and gigs that are of lasting significance to him.

Classic Rock 265 is available in UK newsagents now, and is also available to purchase online.