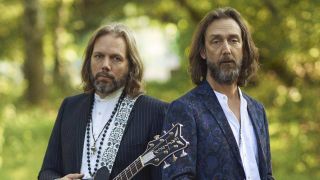 Ex-Black Crowes drummer Steve Gorman recently claimed that Page was “insulted” after Robinson snubbed his offer to write songs with the Crowes after the Led Zeppelin guitarist had played a series of dates with them.

According to Gorman, Robinson told Page: “No thanks... we’ve got enough.” The drummer then alleged that a furious Page informed the Crowes’ then-manager that he was “driving to Connecticut and I’m going to kill Rich in his home’.”

Speaking exclusively in the brand new issue of Classic Rock, Robinson shot down the claim.

“Absolutely not true,” he said. “I remember having conversations with Jimmy, telling him: ‘Hey, if you ever wanted to make a record or do anything, I would love to help in any way I can.’ Jimmy’s a brilliant musician, a brilliant person. I loved playing with him.”

Pointing out that he and Page have subsequently jammed on stage, he added: “Jimmy Page wants to write songs for me, and I’m gonna say: “You know what, Jimmy? Led Zeppelin was alright, but I’m not gonna do it’? It’s the most absurd thing I’ve heard in my life.”

The Black Crowes reunited at the end of 2019 and played their first show together in more than six years. They have announced a UK and European tour, starting in October 2020.

Rich Robinson and his brother Chris appear exclusively on the cover of the new issue of Classic Rock, on sale now.