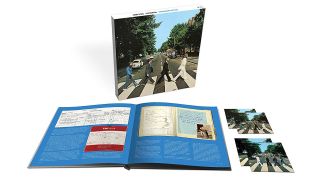 The Beatles classic Abbey Road album is to reissued later this year in celebration of its 50th anniversary.

The deluxe box set will feature all 17 tracks which have been newly mixed by producer Giles Martin and engineer Sam Okell in stereo, hi-res stereo, 5.1 surround and Dolby Atmos, with the package also set to feature 23 session recordings and demos – the majority  of which are previously unreleased.

It will be the first time that Abbey Road has been remixed and presented with additional session recordings and demos and follows the expanded editions of Sgt. Pepper’s Lonely Hearts Club Band and the White Album.

In his forward for the new package, Paul McCartney says: “The Beatles recording journey had gone through many twists and turns, learning curves and thrilling rides. Here we were – still wondering at the magic of it all.”

The box set’s 40 tracks will be spread across three CDs, while a Blu-ray will contain the Dolby Atmos, 96kHz/24 bit high resolution stereo, and 96 kHz/24 bit DTS-HD Master Audio 5.1. A vinyl package will also be made available.

The package will be presented in a 12 x 12, 100-page hardback book featuring McCartney’s forward, an introduction by Martin, chapters by Beatles historian Kevin Howlett, track-by-track details and session notes, along with an essay by journalist and author David Hepworth which will look at the influence the record has had since its launch.

The book will also feature illustrations and previously unpublished photographs, including many by Linda McCartney. There will be images of handwritten lyrics, a George Martin score, recording sheets, tape boxes and reproduced print adverts from the original release.

Giles Martin explains: “The magic comes from the hands playing the instruments, the blend of The Beatles’ voices, the beauty of the arrangements.

“Our quest is simply to ensure everything sounds as fresh and hits you as hard as it would have on the day it was recorded.”

The news comes 50 years to the day since the Fab Four left London's EMI Recording studios to march across the Abbey Road zebra crossing for that famous cover shot.

It’ll be released on September 27 through Apple Corps Ltd/Capitol/UMe.

To mark the announcement, three versions of Something have been released: The 2019 mix, a studio demo and an instrumental version which can be listened to below.