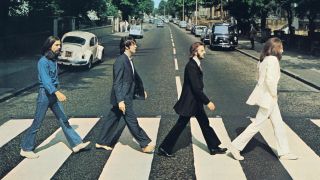 In keeping with the pencil sketch that Paul McCartney had given to photographer Iain Macmillan, the sleeve simply shows the four Beatles walking across the zebra crossing outside Abbey Road Studios in North London.

The famous cover shot was one of six taken by Macmillan at 10am on August 8, 1969. As a policeman held up the traffic, the photographer had just 10 minutes to balance on a stepladder and get the shots. The result was striking and iconic. But few could have imagined the reaction it got.

Shortly before the release of the Abbey Road album, an American newspaper ran a story that claimed Paul McCartney had died in a car accident in 1966, and that the current ‘Paul’ was actually a lookalike called William Campbell. The rumours gathered pace and when Abbey Road arrived that October, its sleeve was pronounced by conspiracy theorists as final proof of Macca’s demise.

Inevitable, the ‘clues’ were somewhat tenuous, McCartney was out of step with his bandmates; his eyes were closed, and he wasn’t wearing shoes (like a buried body); he held a cigarette in his right hand (despite being left-handed); over his shoulder was a Volkswagen with a number plate interpreted as ‘28IF’ (ie McCartney would have been 28 if he lived; although actually he would have been 27).

The order in which the four Beatles were arranged was also deemed significant. John Lennon, bearded and dressed in white, represented Jesus. Ringo Starr, in a sober black suit, was the undertaker. George Harrison’s jeans and denim shirt made him the gravedigger.

Of course, McCartney has always dismissed these clues as nonsense. “We were wearing ordinary clothes,” he once protested. “I was barefoot because it was a hot day. The Volkswagen just happened to be there.”

McCartney’s supposed ‘death’ is old news these days, of course, but the Abbey Road sleeve continues to make headlines. In 2003, US poster companies sparked controversy by air-brushing Macca’s cigarette out of the image. It’s also the subject of the occasional pastiche, most notably by the Red Hot Chili Peppers (whose The Abbey Road EP found them recreating the famous line-up, but naked except for socks on their cocks), and McCartney himself, who returned to the zebra crossing in 1993 for the sleeve of his (knowingly titled) Paul Is Live solo album.