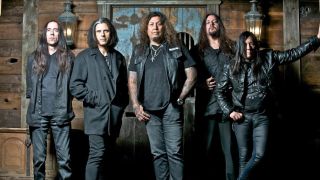 Testament have hinted their 11th studio album will be named The Brotherhood Of The Snake – and it’s due out later this year.

And frontman Chuck Billy hopes to have the title track mixed this week, and released free in the near future.

Billy tells WMSC 90.3: “Right now, I think The Brotherhood Of The Snake is what we’re going to title the album, and it’s the first single. I think it’s probably going to be a freebie that we’ll just give people to check out.”

He also hints he’s been inspired by his Catholic heritage, ancient cults and the “connection between religion and aliens” when writing the follow-up to Dark Roots Of Earth.

He says: “The main part in The Brotherhood Of The Snake is basically, 5000 year ago, secret society stuff. We’re really fascinated.

“I was born Catholic and seeing all these shows on the connection between religion and aliens, it makes you think about everything. There’s a fascination with that.

“I’ll probably connect with my native heritage again in some songs. So, just a little bit of everything that affects our life.”

Guitarist and founding member Eric Peterson previously admitted that Testament chose to delay recording the album until they finished their “killer” tour with Slayer and Carcass. The album was originally slated for release in March 2015.

In a later interview conducted by The National Student, Billy said the album would “definitely” be titled The Brotherhood Of The Snake.