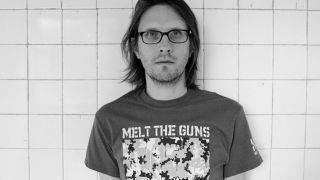 Steven Wilson will return to the UK in January for a run of five dates, he’s announced.

It’s part of a wider European tour as he continues to support latest solo album Hand. Cannot. Erase. which was released in February.

Wilson says: “Due to the great success of sold out tours in the UK and Germany earlier this year, I’m happy to announce the band are returning in January.” The European jaunt starts in Stuttgart on the 12th of the month and wraps up in Newcastle on the 30th.

This week, Wilson explained the follow-up to 2013’s The Raven That Refused To Sing needed a more electronic feel because of the album’s contemporary setting. He said: “Here’s a concept that’s set in the heart of the city in the 21st century. That says, ‘You’re going to need more electronic sounds, almost semi-industrial sound design.”

He previously confirmed two nights at London’s Royal Albert Hall on September 28 and 29, where he’ll perform two different sets.Tickets for the January shows go on sale on Friday (May 29) via his website.