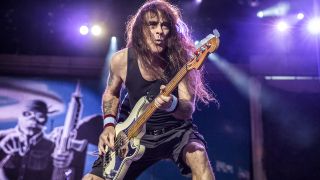 As one of rock’s best-known musicians and someone who has been in the music industry for decades, you might think that Steve Harris wouldn’t flinch at meeting his musical heroes.

However, in an interview in the latest edition of Classic Rock magazine, the Iron Maiden bassist admits to feeling the nerves in front of some of his musical icons.

Asked about who he’d like to work with if he could outside the world of hard rock and metal, Harris replies: “When you’re into bands that much, you don’t really think about working with them. You never really have a chance. You tend to put them on a pedestal.”

When it’s put to him that it’s strange hearing him put people on a pedestal, Harris answers: “Yeah, but I have people that I look up to too. I avoided meeting Jethro Tull’s Ian Anderson for so long because I didn’t know what I’d say to him.

“I ended up playing tennis with Peter Gabriel once, just because he was on the court in the same hotel as me.

The full interview with Harris can be found in the new issue of Classic Rock magazine, which is on sale now.

Issue 271 explores the making of The Doors’ Morrison Hotel and also features artists including Alice Cooper, Band Of Gypsys, Glorious Sons, Suzi Quatro, while there’s an oral history of the goth movement.

Harris and his British Lion bandmates will release their new album The Burning this coming Friday (January 17), while Iron Maiden will return to the road in May for the next leg of The Legacy Of The Beast tour.

They'll kick off with dates in Australia and Japan and will then return to Europe in the summer – a run that includes a headline set at the UK’s Download festival.