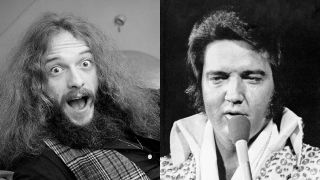 Jethro Tull frontman Ian Anderson has never been one for peer pressure. Still, it was August 1969, and when Elvis Presley summoned you, you came. The King Of Rock’N’Roll was in the midst of a lucrative four-week residency at Las Vegas’ International Hotel, where he received a stream of awestruck visitors before and after shows. No one said no to an audience with Elvis. No one except Ian Anderson.

“We were playing in Las Vegas around the time of [1969’s Jethro Tull album] Stand Up record, and we were dragged by the scruff of the neck to some casino where he was appearing,” Anderson tells Prog. “I was never really a big Elvis fan but I suppose the first couple of songs that he ever recorded were part of my childhood fascination with music.“

Ian Anderson: Saying no to Elvis

Anderson recalls that he wasn’t impressed with what he saw. “I was just appalled by the commerciality and the triteness of it all. And he was clearly out of his box. He was slurring his words, he didn’t know where he was, he would stop the band halfway through his song. It just wasn't the way to see Elvis.”

But the King had heard that this hotshot new Limey band with the crazy hair and the flute were in the audience, and he wanted to meet them. Or at least that was the message Anderson got from the Elvis camp.

“They said, ‘Elvis would like to see you in his dressing room. I replied, ‘Tell Mr Elvis that it is a really great honour to have been here tonight, but we've got a show tomorrow, we’re a bit tired and we need an early night.’ And they said ‘No, you’re not listening – Elvis will see you backstage in the dressing room.’ I thought, ‘This is not this is not an invitation, it’s fucking instruction.’”

Ian Anderson is many things, but bulliable isn’t one of them. His heels were dug in so deep that not even the Memphis Mafia could strongarm him into meeting the King in his court.

“I think a couple of band members were miffed,” he says. “But I felt so embarrassed for him and I didn’t want to make things even worse. And obviously he would have had absolutely no idea who we were, no matter what they said.”

It was a typically Ian Anderson-ish reaction. Jethro Tull’s leader has built a career on confounding expectations, turning left rather than right, marching to no beat other than his own. It’s an approach has served him well during his band’s 50-plus year career. And never more so than on their second album, Stand Up: a transformative record and a key point in Jethro Tull’s half-century long journey – one that marked the beginning of the band as we know them now.

Released 50 years ago, Stand Up remains Tull’s first masterpiece – and it’s certainly one of the singer’s favourites. “The reason is that it’s the first album that I felt creatively responsible for,” he says. “It was a first wet dream involving somebody else at the same time. It’s incorrect to say that we wouldn’t have carried on without it, but things could have been very different for us.”