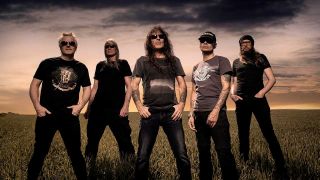 British Lion have released their new single The Burning.

It’s the title track from Iron Maiden bassist Steve Harris and his band’s upcoming album which is set to arrive on January 17.

The single has been released to coincide with the start of British Lion’s UK tour, which will get under way on Sunday (November 15) at the Waterfront in Norwich.

Speaking about the follow-up to their 2012's self-titled debut album, frontman Richard Taylor said: "We’ve been working on The Burning for the past couple of years and everyone is really pleased with the results.

“We started playing some of the songs live on recent tours and got a fantastic reaction from our fans so we are really excited to be sharing this album with the world.

“We’re also looking forward to heading out on the road again and seeing everyone at the shows."

As for the upcoming English tour, Harris said: “I’m in the UK in December and thought it would be great to take British Lion out on the road for a few shows while I’m here.

“We haven’t played any in England since 2017 and as most people know, I love getting out and playing live whenever I can, so this seemed a good opportunity to fit some dates in.”

The band are also playing on next year's Monsters Of Rock Cruise, which sets sail from Miami on February 8.

British Lion are completed by guitarists David Hawkins and Grahame Leslie, along with drummer Simon Dawson.