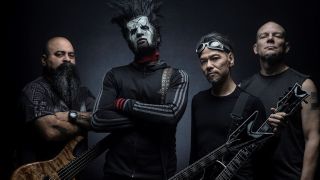 The track will appear on the band’s upcoming studio album Project Regeneration which has been pushed back and is now set to arrive on May 29, 2020.

The original plan for the record was to have several guest vocalists join the core lineup of Tony Campos, Ken Jay and Koichi Fukuda, but after uncovering isolated vocal recordings by late frontman Wayne Static, the decision was taken to have his voice appear on the majority of album tracks.

Bassist Campos explains: “It was very surreal. Our producer was going through all of these old studio tapes, many of which were damaged. He called me up and told me that I needed to get down to the studio right away and listen to what he found.

“I jumped in my car and raced to the studio and what he shared, fucking blew me away – it was Wayne singing on track after track, but there was little to no music on any of it. Most of the tapes were damaged and Waynes voice was virtually all that remained intact.”

Drummer Jay adds: “It was just crazy. There we were, myself, Tony and Koichi, back in the studio together after all these years, and somehow the universe decided to surprise us with all of these lost Static-X tapes containing Wayne’s voice.

“I just couldn’t help thinking that this was all somehow meant to be. I couldn’t stop thinking about how happy this was going to make Wayne’s family, and all of the Static-X fans around the world.”

As for the new track Hollow, Campos reports it was originally a demo from 2005’s Start A War album sessions, but was never completed until now.

He adds: “Wayne and I never felt like the music on the original demo was fully realised. The vocals sounded great, but some of the musical compositions from that time period felt a bit experimental.

“There’s a reason that some of these tracks never made it on a previous Static-X album, and it certainly wasn’t because of Wayne's vocals. The band was just going through a lot of changes at that time and, in retrospect, it felt like we were straying away from that authentic Static-X sound that had really defined us.”

Static-X are currently on tour across Europe and will hit the road in North America throughout November and December with DevilDriver, Dope, Wednesday 13 and Raven Black.