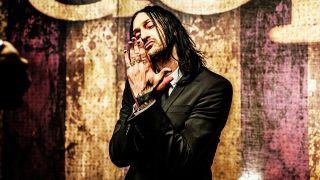 Celebrating 20 years together as a band, nu metal survivors Dope have had their share of ups and downs. With frontman Edsel Dope the only original member remaining, the New York industrialists have released six full-length albums and still have a devoted core of fans around the world.

But if you’re new to the world of Dope, or want a quick refresh in some nu metal outside of Korn and Limp Bizkit, Edsel has picked what he deems the ten best Dope songs of all time. Let’s go.

“A track that was simply written for the pit and one of my absolute favourites! I particularly love the live version from our Live From Moscow Russia album.”

“My number one favourite overall piece of Dope work. The song and the music video combine for an incredibly accurate portrayal of Dope’s energy and venom. I am very proud that this piece of work was released almost 20 years into the band’s career.”

“Dirty, sexy, and simple. This is one of my favourite Dope songs ever! A simple primal riff with a sexy ‘heavy metal nursery rhyme’ type of chorus vocal hook. If you don’t like this song, you probably won’t like Dope.”

“I wrote this song about anxiety and depression before I even knew what those things were. This one has a sick groove, an odd time signature, and a nice combination of melody and grit.”

“Brash and relentless – this song takes no prisoners. Zero fucks are given in this industrial metal anthem. This one slays from start to finish.”

“Dark, ominous, and melodic. This song takes you on a journey to the other side. I’m very proud of the width that this one shows.”

“Track one, album one. Industrial metal and punk-rock in standard E tuning. This one rages against the system and encompasses the spirit of the band at its core development. Angry, simple, and full of middle fingers.”

“She’s like cocaine, heroin, alcohol, and Vicodin, she’s my addiction. The chorus hook says it all. Part rock, part metal. This track has a killer groove and sick guitars, topped with haunting synths, catchy vocal melodies and a bad ass guitar solo by Zakk Wylde.”

“Truth be told, this is not one of my favourite tracks, but I can’t imagine not including one of the most famous songs in the band’s catalogue. This song has become synonymous with the US Military, especially the US Marine Corps. It was blasted through speakers attached to tanks during missions in Iraq. The chorus was eventually implemented into the method of training recruits how to properly fire a machine gun.

“Recruits are apparently instructed to squeeze the trigger, just long enough to utter the words ‘Die mother fucker die’. It has also been said that the song was used to interrogate Iraqi POWs. I never dreamed that my music would be used for anything like this. I’ve met thousands of soldiers that have a deep connection to the song and I am blown away by the stories that I have heard. Wow is all I can say!”

“This is a great representation of how wide Dope’s sound actually is. I truthfully can’t think of many bands that go from the brutality of Die Mother Fucker Die to being this vulnerable. I’ve always prided myself on doing what I felt, rather than what people expected. At the core, I am an artist first. To me, that means expressing myself without a concern for the expectations of others. Nobody lives their life within a singular emotion, so it is my opinion that if an artist safely sticks to the expression of a singular emotion, it’s the ultimate form of ‘selling out’.

The History Of Nu Metal In 8 Songs