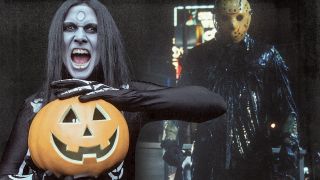 While former Jason Voorhees actor Kane Hodder spends his days choking fans at horror conventions, Friday The 13th superfan and horror metal icon Wednesday 13 collects all there is to find relating to the infamous hockey-masked murderer.

We united the two heavyweights of their respective worlds to meet in the middle and discuss their first memories of the Friday… franchise and how their horror anti-heroes have shaped their careers.

Kane: “I’m a lifelong horror fan and I’ve enjoyed the Friday… movies from the very first one; it was groundbreaking. As an adult watching each successive version of Jason and what he could do next, it was the weirdest sensation the first day
I was on set playing that character. It’s a huge amount of pressure but I’ve got to do the character justice because everyone knows him!”

Wednesday: “Yeah, Jason was already a house-hold name by then. It’s like having to replace the vocalist in a band. I remember watching Part III in 1982 when I was living in a trailer in North Carolina and we had an illegal cable hookup.

"I watched it when my parents were asleep and it scared me to death. I loved it. I lived out in the woods so before that, I would play cowboys and Indians but then I started pretending to hunt for Jason in the woods after school.”

Hammer: When did you first get into horror, Wednesday?

Wednesday: “For me, horror has been a lifelong thing ever since I was a kid in front of The Addams Family and The Munsters. It all fit together to me when I started my band as a teenager – we had to make adverts for the band and I’d look in my horror magazines and throw my band logo over a cool picture from Night Of The Living Dead.

"When I go to horror conventions and I meet guys like Kane that have been in these movies, for me that’s the best thing in the world. I get invited as a guest but I’m there as a fan – all the money I make that weekend on signings I go and spend on toys!

"I have every Friday… toy that ever came out in every size, from the little three-inch Lego-sized Jason to the 18-inch talking models and ones I had to put together and paint when I’d saved up my lunch money. Kane, you got involved with stunts before acting. How did that happen?”

Kane: “I was in college when a friend and I went on the Universal Studios tour and saw the Wild West stunt show. As I walked out, I said, ‘That’s what I want to do with my life.’ It’s a physically demanding career, which I loved because I played sports and I always loved doing dangerous things to entertain my friends.

"Then I realised that people get paid really well for doing those dangerous things that I was doing for free! It’s a hard business to break into but I didn’t care how long it took.”

Hammer: Are there any downsides?

Kane: “I’ve doubled for actors a lot and it can be frustrating when you have to accept as a stunt person that when you put your life on the line doubling for an actor and it comes out looking great, you see that actor on a talk show taking credit for it.

"So many actors say they do their own stunts and it’s such bullshit. I’ll say with confidence that there’s not one actor that does all their own stunts. You’ve got to remember there’s stunt guys who have perfected that stunt before they ever get involved.

"A lot of people don’t know Brad Pitt got injured doing some of his stunt work himself with me for Se7en; he tried to do a cool jump but he put his hand through a car window and sliced the shit out of his arm. I believe he had surgery, which is why he suddenly had a cast on his hand in the movie.”

Wednesday: "You’re a legend in the business, and to me, the only Jason!"

Kane: “I appreciate that! When John Buechler decided I should be Jason for Part VII: The New Blood [1988], that was the ultimate moment because it was not only a character everybody knew, it was a character that had a lot of stunts, which is why John thought I should do it.

"Out of all the Friday… movies, Part VII had by far the most stunts for Jason. The Friday… movies always have big stunts but it’s usually the victims that are having actions done to them.”

Wednesday: "You were Victor Crowley in [2006 slasher] Hatchet. I hope you enjoyed doing that as much as I loved those movies."

Kane: “I personally think the overall quality of the Hatchet films is better than the Friday… franchise because in every Friday…, you get bored between the violence, you don’t care about the characters, nothing else was entertaining about it.

"There’s no reason to not incorporate comedy into these movies – if the killer’s not around, why not have funny scenes between the other actors?”

Wednesday: “Even the violence in Hatchet is hilarious – you ripped a person’s head back, which is almost impossible…”

Kane: “I can do it, I’ll try it on you next time I see you! I also did all the motion-capture for the Friday The 13th video game, so every move Jason makes in the game is me. It took two years to capture all the motions. I never ran as Jason; I always thought that looked too human.

I know it’s ludicrous that people sprint away from Jason but he still catches them. But I always incorporated little tidbits that other people had done in [Jason] performances. Maybe it’s not evident, but to me it felt like honouring all the previous guys. We all know each other, we’re all friends.”

Wednesday: "I’m the same: whenever my band makes music that’s not 100% original, I always try to pay tribute and show that we’re influenced by other bands.
I’ve heard you’re a fan of Insane Clown Posse. What got you into them?"

Kane: “I did a video with Insane Clown Posse and [hip hop group] Twiztid for Another Love Song and that’s how I became an ICP fan – and even more so of Twiztid because I’ve worked with them several times. People ask how I listen to hardcore rap
at my age, but why do I need to change my listening habits just because I’m older?”

Wednesday: "I don’t think anybody’s gonna tell you any different because you can just break their necks! What other music are you into?"

Kane: “I’ve always been a metal guy. The first album I ever purchased was Black Sabbath’s Master Of Reality [1971] on reel-to-reel tape. We lived on a tiny island in the South Pacific, so reel-to-reel tapes were outdated even then, but that was all we had out on the island.

"I loved Sabbath and Ozzy and that’s why I became a giant Metallica fan. I’m still amazed how good Metallica are onstage, after how long they’ve been touring. James hasn’t lost his voice, they put on an amazing show.”

Wednesday: What’s your favourite Friday… movie that you’re in?

Kane: “Part VII: The New Blood for sure, because of all the stunts I had to do and the look of Jason was the best. I also really liked Jason X [2001] because we finally had a good budget and some time to shoot stuff. It was a crazy concept and it was a lot of fun.”

Wednesday: “My favourite kill scene is in [1989’s] Jason Takes Manhattan where the
guy says, ‘Go ahead, take your best shot, motherfucker’ and he just knocks the guy’s
head off! I remember watching that thinking, ‘This movie is so cool’ – that was one of the most over-the-top kills.”

Kane: “My all time favourite I’ve done was the sleeping bag in Part VII up against the tree, because I’m killing someone with something that wasn’t a weapon. We recreated that kill again in Jason X.”

Wednesday: “There’s so much that could be done with it if they made a new Friday… movie now. It could be a new version made dirty or scary. I think it can be done and it will be done once someone gets a cool idea.”

Kane: “I certainly think they need to do one more because it would be the 13th film! There has only been 12 so far. Hatchet’s [director] Adam Green would be a great director because of his background. Obviously, I would love to play Jason one more time. I’ve still got rage I could express. Bring me back one last time, continue the tradition and bring back some of the other survivors!”