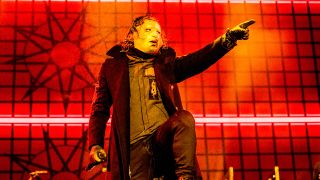 Corey Taylor reports he’s been away from social media for six months and says the experience has been “brilliant.”

The Slipknot and Stone Sour frontman was speaking with the Irish Times when he was asked why he decided to move away from his accounts, with the vocalist saying that someone else now runs his online presence for him.

Taylor says: “I have been off social media for six months. It’s been brilliant. I don’t miss it at all. Here’s the thing. It made me go back and read the news again. I read the news every day.

"It’s not like I’m not up to speed with everything, but now I’m not getting shitty reactions to news stories. I’m not barraged by a bunch of memes in reaction to a news story here or there.

“Now I’m getting the story itself and I can form my own opinion. I can talk to people face-to-face about it. I can’t tell you how tired I am of people being incensed about something. That’s all news stories are now. It’s everyone looking for a reason to be mad. I’m tired of people being mad.”

Asked whether his mental health has improved after removing himself from the constant social media chatter, Taylor replies: “Absolutely. There was a few years when I was dealing with some shit right around the end of my last marriage.

“It was because my real life had become so unhappy. When I got out of that situation, I took a long look at where I had gone to. It took me a long time to extricate myself from it and now, a year ago, I made the change.”

Taylor adds: “I have somebody who runs my social media for me and that’s all it should be.

“From social media, from my point of view, you don’t know who is trying to talk to you, who they are and what they want from you. When you don’t give them attention, they turn on you.

“I have had to deal with some serious shit because of that. It’s called cybertrolling. In a lot of ways it really is stalking. It’s the darker side of fame that people don’t want to talk about.

“It’s everybody from me to Chrissy Teigen. It’s really got to the point that it is a dogpile. If you don’t give them the right kind of response, they will come after you in the dirtiest ways creating different accounts under different names.

“That to me is enough not to ever go on social media again. It brings out the worst in people. It is social mania. It’s ridiculous.”

Slipknot are currently on the road across the UK – part of the band’s European tour in support of their 2019 album We Are Not Your Kind.

Last week, the Iowa heavyweights released a short film titled Pollution which was based around the video for Nero Forte and directed by Shawn ‘Clown’ Crahan.