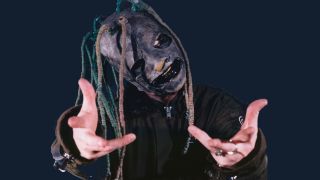 We might all be obsessing about Slipknot's brand new, shiny release We Are Not Your Kind, but let's take a little stroll down memory lane to a simpler time...

Back before Tom Cruise met Katie Holmes, when we could finally kick our Walkmans to the curb and enjoy our music minus the skipping, thanks to the very first iPod.

When one little hobbit found himself in possession of one powerful ring and when denim on denim was still a thing. Yes, you guessed it, we're talking about 2001.

It was also the year when our favourite aforementioned masked metallers were due to release their eagerly anticipated second album. Could Slipknot follow the devastating success of the 1999 debut?

Yes, hell yes they could and they did. The band outdid themselves, delivering an album that would prove to be their darkest offering to date, and that many maggots still consider the pinnacle of the band's discography. That album was Iowa, the album that would define them.

But what was the thinking behind the record? We delved into the vaults and look back to when Hammer chatted to Corey Taylor ahead of the seminal album's release – a whopping eighteen years ago – to find out exactly what motivated the eighteen-legged Iowan juggernaut to reach their finest (and darkest) hour.

Can you give us an insight into the thoughts and emotions behind Iowa?

“The music is a lot heavier, a lot darker, a lot faster and the lyrics are a lot deeper. We had the idea of naming it Iowa even before we started working on the music.

“But as we progressed ,we started to see all these things were coming out – a lot of personal issues if you like – basically a lot of reflections of where we come from. So it just made sense to name the album that.

“It’s also important to give people a different perspective of a state that is just seen as place with lots of cows and farmers. Well, we are here to say it’s not all about that!”

‘A lot faster, a lot heavier, a lot more aggressive.’ That’s a pretty big statement considering where you have come from. Can a band as heavy as Slipknot take such a step?

“You bet we can! We just went back to our roots – thrash metal, black metal and bands as heavy as Sabbath. We went back and created something that is going to piss a lot of people off!

“We had a lot of places where we could go with this record. People were telling us ‘Oh you can go commercial’, and, ‘You could do a whole covers single thing’ or whatever… but we didn’t fucking want that.

It sounds like Iowa is going to lose a few people who are just peripheral fans of the ‘Knot – the non-maggots who are just in it for the popularity thing. Is that how you see it?

“I’ll put it this way – this album is going to scare the fuck out of everyone who liked WaitAnd Bleed, I can tell you that much! I mean there are still a lot of good melodies on there, I always make sure there is at least something to grab on to, but this album is a fucking monster. It’s going to kick!”

How does a Slipknot song come together?

“Overall, it’s mostly an equal sharing thing. As far as the music goes we all pretty much contribute. As far as the lyrics go, I wrote 98 per cent of everything on Iowa.

"There is a song called Gently which is an old song from the old school [originally appears on their Mate, Feed, Kill, Repeat indie release from 1996] that Shawn [Crahan] wrote the lyrics to.

"There’s also another called The Heretic Anthem that me and Joey [Jordison] wrote together. They’re just words but they mean a lot to us so we don’t really like to just write on the road. We waited until we’d finished touring and got back to the basement and basically started writing and creating.”

Slipknot are technically proficient, but it must be hard keeping nine members all focused?

“Fuck yeah it’s hard! That said it’s not as hard as you think but it can be difficult, especially when we are on stage together. We feel everything we do, so it is not so hard to stay in-sync when everything is going on up there. But in the studio you can’t touch us – we are just on top of everything.

“We recorded Iowa at Studio City in LA. It was a weird departure from the previous stuff that we had recorded at Indigo studios which is [producer] Ross Robinson’s place up in the hills and away from everything. But it was really cool. We had a lot of cool people working with us like Ross, so we had a good time.”

Slipknot also co-produced the album. Was that all of you or just one or two members?

“It was mainly Joey – he has a great ear for that sort of stuff and I think he’ll probably continue do that in his future. He would bring us back the mixes he had made and we were just like, ‘That’s really cool or let’s take that bit out’, you know that sort of thing.

"So it was still a group thing but we had so much trust in what he would do – his vision and his ear, so we knew it was going to come out brutal as hell. And it has come out perfect.”

You’ve held the album back from the media – was that a deliberate thing?

“Absolutely, we are trying to put the mystique back into music, you know what I’m saying? Yes, I know we’ve changed the masks slightly as well, but everything today is about mass marketing or cross promotion and all that crap and we wanted to get away from that.

"We wanted to put a little bit more danger back into it. We did that before, but we wanted to put our money where our mouth is and come up with something special that everyone is waiting for.

“We pump a lot of our own money back into Slipknot’s show as well. Obviously we’re not fuckin’ poor by any means, but we’re hardly fuckin’ millionaires either! We put as much back into the band as possible because we can’t just take it for ourselves.

"We don’t want to go to the record company and say we need this, this and this. This way we get to take all the control away from them, ‘cause the next time they want to put there hands on things we can just say, ‘Fuck that man – you ain’t doin’ it!’ We’re just going to do what we do whether they like it or not.”

There’s been a change in the masks and suits too…

“Yeah, we’ve got the goat on the left front chest, and of course our own number on the sleeve, and on the other sleeve we’ve got the tribal ‘S’ for Slipknot – it’s all part of our ‘Iowa’ concept – wait n’ see…”

Some of the masks – the Clown’s in particular - look very evil and sinister now – was that a conscious move on your part?

“Yeah, we are all definitely more evil! Mine’s a new mask too. We got together with a good friend of ours named Screaming Mad George and we had actual moulds taken of our faces.

"We sat down with him and explained what it was that we each wanted to do and what we each wanted bring out of us. The way I look at it is that we’re changing the expression on our faces. You know you can’t be the same guy all the time – if you try to be you’ll end up killing yourself.”

Just a weird question that Hammer has been dying to ask you. Were any of Slipknot ever in the boy scouts?

“Ha! Ha! Yeah, I was in the cub scouts for two weeks and then I got kicked out because I rode my bike through the screen door of my den mother’s house and basically set her house on fire! I didn’t mean to, I swear to God I didn’t! So I guess the real answer is no, Slipknot were never boy scouts!”