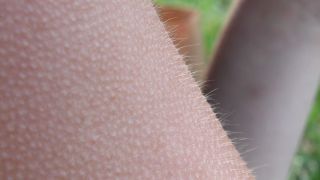 People who experience ‘skingasms’ when listening to music are more likely to be emotional, open to new experiences and have greater intellectual curiosity, research shows.

A study by Eastern Washington University discovered that people who get goosebumps, or frisson, when listening to a dramatic piece of music score high on a personality trait called ‘Openness To Experience.’

In an article on The Conversation, social psychologist Mitchell Colver says those who possess the trait have “unusually active imaginations, appreciate beauty and nature, seek out new experiences, often reflect deeply on their feelings, and love variety in life.”

Though the phenomenon is still being researched, scientists say skingasms are an evolutionary response to unexpected stimuli in an environment. In prehistoric times, this reflex raised the body’s hair and helped retain a layer of heat in colder weather.

Nowadays it is estimated that only two-thirds of the population able to experience this “sudden wave of pleasure” as a result of artistic experiences – such as an unexpected harmony, change in volume or a moving solo in a piece of music.

The study also finds that a musically-triggered skingasm was a result of “cognitive components of ‘Openness to Experience’ – such as making mental predictions about how the music is going to unfold or engaging in musical imagery, which is a way of processing music that combines listening with daydreaming. These are associated with frisson to a greater degree than the emotional components.”

The researchers add: “Those who intellectually immerse themselves in music, rather than just letting it flow over them, might experience frisson more often and more intensely than others.”