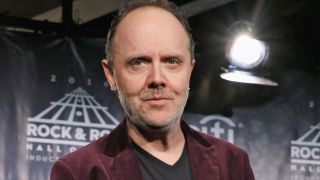 Metallica drummer Lars Ulrich has offered a comparison between iconic 1986 album Master Of Puppets and their next release.

And he’s admitted his biggest regret with their third title is the amount of reverb used in the mix.

Speaking the the US Library Of Congress on the occasion of Master Of Puppets being added to its permanent registry, Ulrich says: “Obviously the album has resonated with not only the Library, but with fans and critics.

“I’m not sure I can sit down and listen to it, though, and not yell, ‘Will someone turn the reverb down!’”

He adds: “I guess there’s a cohesiveness in the songwriting and the production. It works really well as a cohesive landscape, a musical territory. I’m happy it all lined up.”

He recalls being “infatuated with the overdubbing opportunities and with all we could do in the studio” as they worked.

“Ideologies change – they go through arcs,” he reflects. “At that time there was an evolution happening and people took it seriously.

“The record we’re now working on is more about capturing a mood, making it sound raw and not overproduced.

“But it was a different vibe then and we were comfortable with it – we were excited about multi-tracks and all the gadgets.”

Ulrich retains a “close relationship” with every Metallica record. “I find things I like and then things I question, and things I dislike, and things I’ve grown to appreciate,” he reports.

“To me, all the records are a time capsule, a photograph, of what our abilities were, and of that particular situation.”

The follow-up to 2008’s Death Magnetic is expected later this year. Ulrich this week commented on the long-circulated story that Metallica had considered firing him in 1986, saying he hadn’t been aware of the plan.

Every Metallica album ranked from worst to best