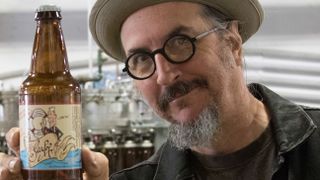 Les Claypool and a bottle of SeaPop

The bass virtuoso says the drink is “like a ginger-snap dipped in vanilla ice cream” and that it’s here to “mellow things out in a world saturated with energy drinks.”

Claypool says: “Years ago I accidentally ruptured my inner ear scuba diving off the California coast and since that day I’ve found myself a bit more susceptible to the adverse effects of motion.

“Not liking how most of the over-the-counter medications made me feel, I sought out alternatives. In 1945, my grandfather, petty officer third class Glen Claypool, was a landing craft pilot in the South Pacific.

“Just after his 98th birthday I asked him what he and the soldiers he ferried to the beaches did about sea sickness. He promptly quipped, ‘Well, you just hung yer head over the side and let her go.’

“Well, I don’t like to ‘let her go’ so it became my notion to create a tasty, natural, soothing beverage to help tame the rough seas within.”

Working with a herbalist and recruiting his teenage son to advise on the taste, Claypool “blended ginger with other traditional, stomach-soothing herbs as well as a pinch of cane sugar.”

Claypool recently released his album with Sean Lennon called The Monolith Of Phobos, under the banner of The Claypool Lennon Delirium.