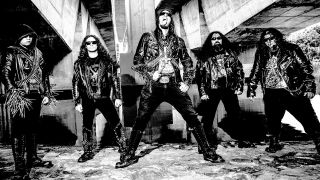 Singapore-based black metal band Devouror have been forced to cancel their show that was due to take place in Kuala Lumpur on Easter Sunday.

Everything seemed to be going as planned until the Council Of Churches Of Malaysia intervened, questioning why the band were granted permission to play on that particular day.

The council's general secretary Rev Dr Hermen Shastri said (via Channel News Asia): “The CCM calls upon the relevant authorities to explain the basis for granting permission to such bands that promote their music by using extremely offensive and denigrating language that can hurt the religious feelings of others.

“This will be considered an affront to the religious sentiments of Christians in the country.”

The show organiser Goatlordth Records later issued a statement confirming the concert had been cancelled, saying they were “devastated” at the move, and lamented the fact that extreme music was being unfairly targeted.

It’s not the first time that extreme metal has faced hostility in Malaysia.

Carcass were forced to cancel a trip there in 2015, while in 2014, Malaysian censors seized copies of Jimi Hendrix’s Axis: Bold As Love for offending religious beliefs – 47 years after it was first released. Lamb Of God have also been blocked from appearing in the country.

Metal has also come under fire in Singapore, where last month, an online petition was launched to stop Waitain and Soilwork from playing, while in September 2018, Marduk were banned from entering Guatemala for being “satanic”.