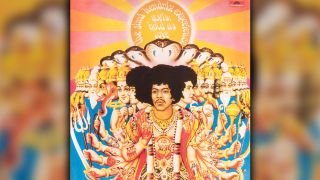 The Jimi Hendrix Experience classic album Axis: Bold As Love has been banned in Malaysia – 47 years after it was first released.

The nation’s censors have seized copies of the work after decided that the cover, which shows the iconic guitarist and his bandmates as Hindu deity Vishnu, could offend religious beliefs.

The ban comes after a Hindu association objected to sales of posters based on David King’s sleeve illustration earlier this year.

A spokesman for the Home Ministry Publication Control And Koranic Text Department tells the Malay Mail: “If it uses Lord Vishnu’s image, then of course we won’t allow it. We’ll take action against anything that violates religious sensitivities – whether it’s Christianity, Buddhism, Hinduism or Islam. We must respect each other.”

Hendrix himself was unhappy with the Axis cover when it originally appeared. It’s thought he’d asked for art inspired by American Indian culture, to reflect his own background – but that the record label misunderstood and commissioned an idea taken from the culture of India.

But the 1967 album itself, which includes the tracks Little Wing, If 6 Was 9 and Wait Until Tomorrow, could still be sold in Malaysia. The government spokesman adds: “We don’t care if Jimi Hendrix albums without cover art featuring Lord Vishnu come in.”