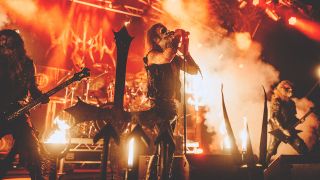 Last week, we reported that an online petition had been launched in an effort to stop heavy metal bands from playing in Singapore.

The petition was aimed directly at Watain and Soilwork, and had been set up to alert the Ministry of Culture, Community and Youth to the bands’ upcoming shows at the EBX Live Space.

As a result, Watain’s show in Singapore was cancelled last week, with only a meet and greet taking place – and the band have reacted furiously and slammed the “honourless rats” behind the decision.

They say in a statement: “In the light of yesterday’s events in Singapore, we would like to send a proud hail to our fans and followers from Singapore, Indonesia, Sarawak, Burma, Laos, Phillipines and Malaysia who had travelled to see yesterdays performance but were robbed of their experience at the last minute by Singapore’ s tragic excuse for a government.

“It was an honour to meet you all yesterday and to sense the fire in your eyes and in your spirits. We look forward to the day we can perform for you without the interference from lesser men.

“To the honourless rats behind the ban, rest assured that you in your cowardly act has only stirred the cauldrons of your own misfortune.

“If these men and women didn’t already feel mistrust and contempt towards ‘authorities’, they sure do now. The flames of discontent have once again been kindled, may they scorch your heavens.”

Soilwork, meanwhile, are scheduled to play in Singapore in October, with many tickets for the show already sold out.