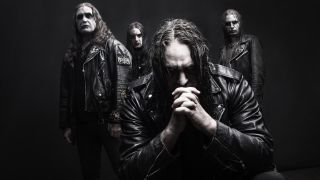 Marduk have been banned from entering Guatemala on their current Latin American tour.

The Swedish outfit are due to play in Guatemala City on October 11, but Billboard report that a congressional decree has been approved in the country by 87 votes to 13 that they should be blocked from entering the country because of the “satanic” nature of their lyrics.

Author of the initiative Deputy Aníbal Rojas claims that the band “does not have any kind of relationship with art” and attacks the "spiritual values" of families.

But the decision has come under fire from some politicians, including Deputy Eva Monte, who, according to the website La Actualidad, says banning Marduk from entering the country “violates freedom of thought, association and religion.”

It’s also reported that Marduk could encounter problems when they travel to Colombia for two shows in October.

La Actualidad say that councillor Marco Fidel Ramírez has begun a social media campaign to try and prevent them from playing the concerts in Pasto and Bogota, calling the band “satanic, corrupt and blasphemous” who offend “the fundamental values of Christianity.”

In February 2017, police forced Marduk to cancel their performance at the Metro Operahouse in Oakland as authorities believed there would be “threat to public safety” as it would draw anti-fascist protestors.