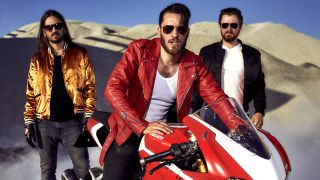 Norwegian outfit Shining have released a lyric video for the title track from their upcoming album, Animal.

The record will arrive on October 19 via Spinefarm Records and will be their first release since 2015’s International Blackjazz Society.

Speaking about the track, multi-instrumentalist, vocalist and songwriter Jørgen Munkeby says: “When we wrote Animal, we knew that we would want to announce the album with that song.

“It's just such a fun and rocking number, and I also can't wait to open our live shows with it!”

As for the theme of the album itself, Munkeby adds: “I was tired of doing the same thing. I was done with Blackjazz and wanted to create something new and exciting. I needed a change.

“I’m finally at the point where I have nothing to lose and everything to win. We had 360 degrees to play with so we could’ve gone in any direction.

“This new record is more Muse than Meshuggah, more Ghost than Gojira, and more Biffy Clyro than Burzum!”

The band have also announced a European tour which take place throughout October, November and December. Find a full list of dates below.