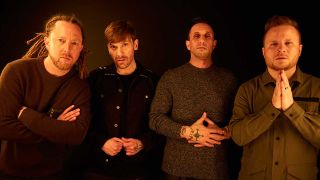 Shinedown have released a live video for their track Get Up.

The song features on the Florida outfit’s latest album Attention Attention, with the Sanjay Parikh-created promo filmed during the band’s world tour in 2018.

The focus of the video is firmly on the fans, and features crowd shots, film from outside the venues and footage from the meet and greets on the road.

Shinedown say: “We are so excited to share our new live video for Get Up featuring footage from our Attention Attention world tour and most importantly featuring you… our family.

“It's been incredible to witness the connections you've made with this song from the road. We hope you enjoy!”

Shinedown previously said that the follow-up to 2015’s Threat To Survival was their “most raw and personal” album to date, and took the form of a “mental, emotional and physical journey that follows an individual from life’s lowest lows to the highest highs, as anxieties dissipate and demons disappear.”

Shinedown were named the hardest touring artist of last year after they played 136 shows and clocked up 47,470 miles in the process – and they show no signs of slowing down as they prepare to hit the road with Papa Roach and Asking Alexandria later this month.