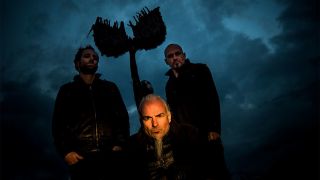 The song is taken from the band’s upcoming tenth album Hegemony, due for release on October 13 through Napalm Records.

It is the band’s first full-length since their 2011 album Lux Mundi, and the first to include new bassist Thomas Betrisey, replacing Christophe Mermod.

Samael are playing two festivals before the end of the year, at the following dates:

Hegemony is available to pre-order now.