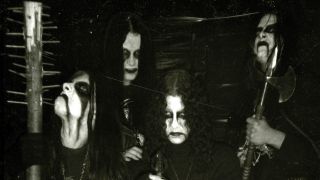 In 1991, extreme metal was in a violent state of flux. Death metal had polished itself up and emerged from the tape-trading underground as a serious commercial force. Sweden was a prolific stronghold; scene leaders such as Entombed, Dismember, Grave and Unleashed were selling worldwide, and the inexhaustible torrent of new bands and demos continued apace.

As the year began, Norway’s modest scene was languishing in the shadow of their more popular, professional Scandinavian neighbours, but by December a Norwegian revolution had occurred, sharply dividing the underground and spawning a set of distinctive aesthetics, harrowing atmospheres and merciless philosophies, pushing metal to dangerous, abstract new extremes. This approach would escalate to arson, murder and lasting infamy for the black metal scene, but in 1991 that was all in the future.

“We didn’t have any ambitions, we didn’t try to fit in or make products that would be available in a mainstream form,” says Ihsahn, frontman with black metal figureheads Emperor, who formed in 1991. “That’s the only state of mind where we could create something unique enough to have that impact.”

The roots of Norwegian black metal lay in the mid-80s. Since 1984, Mayhem had staggered along that indistinct 1980s line between thrash, punk, death and black metal, but by 1991 guitarist Euronymous was hardening a combative elitist stance that quickly came to dominate the Norwegian underground.

“Ninety-five per cent of the bands today are worthless shit,” he announced in issue 8 of Slayer zine. “There are just a few who manage to capture the brutality and evil which the ancient bands like Sodom, Destruction, Bathory, Possessed, Venom, Hellhammer/Celtic Frost and so on had. It’s very important that the music is filled with dark moods and the music smells of destruction.” He spoke of his dream of a scene where bands in spikes and chainmail played music that was “gruesome and evil, that normal people fear.”

One person who read the interview was a teenager from the sleepy town of Notodden in southern Norway named Hårvard Ellefsen, who started 1991 fronting a Carcass-inspired junior-DM band by the name of Rupturence.

“The main reason the whole Norwegian black metal scene got going was probably thanks to that Mayhem interview,” he says today. “It was [singer] Dead and Euronymous talking about how the scene was dead and boring. It influenced us a lot; we were like, ‘Fuck man, these guys are right!’” By the end of the year Harvard would have adopted the name Mortiis and joined Emperor as bassist and lyricist.

Mayhem’s infamy only grew when the intensely committed Dead killed himself in April 1991. It precipitated such a call-to-arms response from Norway’s underground that, within months, Euronymous’s dream had come true.

Darkthrone were the first to react. The trio had begun 1991 by releasing their highly creditable, if distinctly Swedish-sounding, Soulside Journey debut, but within months they were publicly repudiating death metal, amplifying those mid-80s influences cited by Euronymous and recording the genre-defining classic A Blaze In The Northern Sky in August. Tellingly, it was “eternally dedicated” to Euronymous, “the king of death/black metal underground”, who cemented this reputation by opening Oslo record shop Helvete in summer ’91. Mortiis remembers Helvete’s fetid breeding ground in its heyday: “‘Everybody there in ’91 was either in a band or about to join one,” he recalls.

Aside from Mayhem and Darkthrone, the earliest Norwegian black metal in ’91 retained the over-eager cack-handedness of tentative juvenilia, but two musicians straightaway loomed head- and-shoulders over contemporary din-makers. Vegard ‘Ihsahn’ Tveitan and Tomas ‘Samoth’ Haugen had been making music together since 1989; entering 1991 in the appropriately named DM band Embryonic, the pair were already impressing their peers. “They were way ahead, we thought at the time,” remembers Mortiis.

Swiftly this dynamic duo started another new band, Thou Shalt Suffer, recording two demos and an EP within six months. Although retaining cryptic deathly traces, early atmospheres of frostbitten grimnity and keyboard-laced majesty were glimpsed in embryo, yet despite the promise so evident in these recordings, Ygg and Samot (as they then styled themselves) had one more ace up their sleeve in this turbulent year: Emperor.

“Emperor really started as a side-project to go back to basics, more primitive, towards the old school,” affirms Ihsahn of the now-legendary band’s earliest impulses. “The borders were really clear-cut, although Thou Shalt Suffer still had some of that evil, Satanic vibe about it. By the time we recorded the first Emperor EP, we’d decided to bring in the keyboards and that more epic atmosphere, so all the stuff we’d been doing then culminated in Emperor.”

“They wanted to move more in the black metal direction,” says Mortiis, reminiscing about the day he was asked to join Emperor. “I don’t think they called it that at the time, they just wanted to do something darker and more occult.”

Although this would become a popular pastime in Norway in ’91, Mortiis knew he was getting involved with something very special. “The cool thing about Emperor in the very early days was that they immediately seemed quite original,” he says. “Maybe that’s because Ihsahn doesn’t come out of that underground death metal scene, he came out of trying to be a fuckin’ great musician. He was a really musical guy, so that added to this whole thing being a bit different.”

“We wanted to create music that sounded fucking larger than life,” explains Ihsahn. “That’s why we put all those keyboards in, and all that reverb – we wanted it to sound like a soundtrack to the most epic, violent, dark movie ever! It was almost delusions of grandeur in an artistic sense. With our music we wanted to paint endless dark forests with a constant full moon, and to live that fantasy. There was such a strong dedication to that, not even lifestyle, just this fantasy world that we’d created!”

Within two years, that fantasy world had turned sour. Euronymous was murdered by Vikernes, and after a notorious spate of church burning, assault and murder, by the mid-90s Ihsahn was the only member of Emperor not in prison. Mortiis, who had left Emperor in 1992 and quickly retreated into his dungeon to begin a 25-year solo career, remembers how quickly the scene imploded.

“It didn’t last long. We’d take our lyrics and try to live them as much as possible, which didn’t end well. Once you got into that whole downward spiral of being crazy and extreme, it was bound to dissolve. It was like a cult; one person would spur everyone on and it became this loud, screeching feedback effect where it was bound to end in insanity. That scene got really scattered and messed-up in 1993, but by that point it was spreading across the world, lots of bands were popping up, it was too late to stop. And it’s still here, so fuck, man, we did something right. Kinda.”