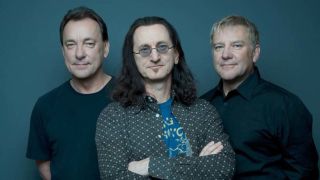 Rush drummer Neil Peart says he’s surprised no one has approached the band to make a movie based on their 2012 album Clockwork Angels.

The lyrics chronicle a young man’s journey across a steampunk world filled with pirates, anarchists and exotic carnival performers.

And although a comic book and novel based on the album have been released in conjunction with author Kevin J. Anderson, Peart would like to see a bigger project emerge.

He tells Rolling Stone: “To me, it would make an amazing movie and I thought it would happen organically – that by now somebody would’ve been at my door with a big bushel of dollars saying, ‘Let’s make this happen!’ And it hasn’t.

“But we’ve got the graphic novel done and we’re building the world and the vision of it. It’s astonishing to me, really, that somebody hasn’t come to me wanting it.”

He continues: “I thought, ‘What a great semi-retirement project for the three of us,’ because Geddy loves cinema, Alex for the soundtrack, and me for the story. But I was hoping that’s a project that the three of us would undertake at some point.”

The sticksman also reveals that prior to their current tour, they toyed with the idea of recording a follow-up to 2004’s Feedback, which was released to mark the band’s 30th anniversary.

Peart adds: “We thought maybe we’d do another Feedback thing of cover tunes. Never got motivated for that. And then when we started talking, it was about playing live.”

Rush are currently on what’s been described as the “last major tour of this magnitude,” although bassist Geddy Lee said last month he had ideas for shows that didn’t involve a lengthy run of dates. Their recent hometown concerts in Toronto were filmed for a future release.

Rush: an epic interview with Geddy Lee and Alex Lifeson