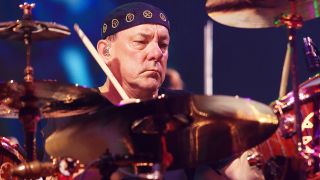 Streams and sales of Rush’s extensive back catalogue soared in the US in the days following the death of drummer Neil Peart, according to Billboard.

News of Peart’s death was announced last Friday, with a statement from the band saying that the 67-year-old died on January 7 after a three and a half year battle with brain cancer.

Figures compiled by Nielsen Music/MRC Data reveal that between January 10-13, audio streams and video footage of the trio’s music were up by 776.4% – hitting a combined figure of more than 24.5 million.

The most played track was the Moving Pictures classic Tom Sawyer, which was played 2.82 million times compared to 698,000 streams the week before.

On Friday evening into Saturday, tributes from the world of music flooded in for Peart, while artists who were in concert in the hours after the news broke paid their own tribute to the influential musician, including Tool, Dream Theater and Styx.

Fans have also shared their own tributes to Peart on social media over the past seven dates, with more than 24,000 messages posted to Rush’s Facebook page alone.