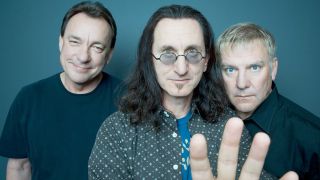 Geddy Lee says he’s come to accept that Rush’s touring days are over, following their R40 US trip earlier this year.

And guitarist Alex Lifeson reflects that “it’s okay” as they consider what to do after drummer Neil Peart accepted a description of himself as “retired” then withdrew from making further commitments after the tour.

Lee tells The Strombo Show: “There’s a bit of denial that gets you through. You go, ‘Ah, this won’t be the last one – we’ll take a break, then we’ll get back together and do another one.’ You don’t want it to end.

“I think I’ve accepted that it’s probably the last one as a tour. We’ll see.”

Asked about their communication with Peart, Lee says: “We send all these things, but the responses are not as enthusiastic. We talk.”

Lifeson adds: “It’s okay. It is what it is. I’ve been playing a lot to keep my fingers in it, and I’m finding it’s really satisfying.

“I’m going some charity gigs with other guys – old guys like me that don’t have gigs any more. It’s fun to get together. It’s not like it’s over, you know.”

Lee reports that he’s “had some approaches” for “records with other people” but says he’s not ready to think about it yet. “My attitude is that I needed a good clearing of my mind before knowing where my heart wants to go next as an artist. I think that’s sort of were we are right now.”

Lifeson continues that, although it’s possible the pair could write together, they haven’t done so yet.

He says of the R40 tour: “After doing this, Geddy and myself, for 47 years, you took in every second of every show and scanned the whole crowd – just put it in your memory banks.”

Concert movie Time Stand Still was shot during the tour, screened in cinemas last week and is released on DVD on November 18. A 40th anniversary edition of classic album 2112 arrives next month. The band will receive another humanitarian award in April.