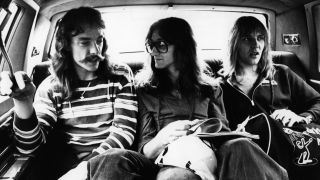 Although he’s in town to promote what might be the band’s last ever live DVD, Rush: R40 Live, Lee’s currently batting away break up rumours fuelled by drummer Neil Peart’s essay for Drumhead magazine that suggests he’s finally retired from the band.

Though neither are the reason he’s sitting down with the Prog show. On April 1st, 1976 Rush released the album that would not only help define them as a band but save their careers. Forty years later and Lee’s recalling just how easy the whole thing was to make even in the face of overwhelming adversity.

“We pretty much wrote it on acoustic guitars in our Holiday Inn room or the back of a station wagon. We actually went back to writing that way for the Snakes & Arrows album.

“The album just flowed; one song came out of the other. Alex and I knew what wanted to write even before we saw the lyrics, the overblown intro, the pacing, the movements… And then Neil had written these lyrics and it was almost magical how well they worked. There was a lot of passion in that record, a lot of ferocity and it cut through the static of the music that was out there and it reached people.”

For more on Rush’s musical highlights, then click on the link below.

The 50 greatest Rush songs ever