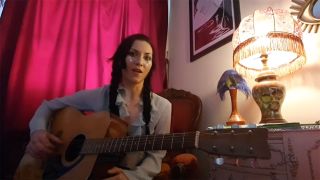 Rosalie Cunningham has sent Prog readers a lockdown video in which she not only talks about her own recover from Covid-19, but also performs an acoustic version of Purson's Tempest And The Tide from the band's 2013 debut album The Circle And The Blue Door.

Cunningham announced she's contracted coronavirus in March when she returned from her tour in support of her self-titled debut solo album. She's since made a full recovery, and as you can see, has certainly been busy during her time in lockdown.

"Prog magazine asked if i’d make a lockdown update video for them and it seems I got carried away with playing a song and forgot to actually go into much detail about how the current situation has affected me," says Cunningham. "It’s not always been easy to remain optimistic as, one by one, plans are dropped and the calendar empties. A part of me quite enjoys meandering through the days as a lady of leisure but I should be in the studio right now recording an album. The band and I should be on tour in two weeks time and looking forward to a summer of festivals in Europe and the UK but instead the foreseeable future is cancelled. I’ve been pretty quiet about my plans online as things are constantly changing but I will be making announcements about rescheduled dates etc. The album that i’d hoped to get out this Autumn will most likely be released early next year now.

"Luckily Rosco and I live in our home studio with plenty of toys to play with. It’s been hard to keep motivated and inspired to be honest but this period has bore some fruit at least. A couple of new songs and a few new ideas are floating about. We’ve been making the most of the lovely weather by spending every moment we can on the tiny square of tarmac outside we like to call the ‘veranda, darling’, drinking lots of wine and having BBQs. Also going for long bike rides in the woods or on the seafront. It’s not all doom and gloom at all!

"I celebrated my 30th birthday last week with a lockdown Zoom party. This seems to be the way most of us are socialising these days and I must say, it was a lot of fun and brought together friends and family I probably wouldn’t have seen otherwise. It highlighted this fact and made me decide that, when this is over, I will certainly be making an effort to see more of the people I cherish."