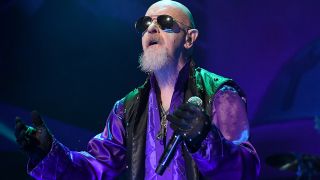 Judas Priest are set to celebrate their 50th anniversary in 2020 with a run of live shows across Europe.

Frontman Rob Halford checked in back in October to say they had a few surprises up their sleeves and were planning on delving deep into their extensive back catalogue to mark the milestone.

And in a new interview with New York’s Z93 radio station, Halford was asked if there was a possibility of former Judas Priest members joining them onstage to celebrate 50 years of metal – in a similar way to what Foreigner did in 2017.

Halford responds: “That's a cool question. It's like anything in rock’n’roll. I love the kind of chaos that surrounds rock’n’roll. That's, to me, what it's all about. There should be no laws, regulations or restrictions.

"Anything can happen with Priest. So, just keep an eye out and a lookout, especially when we play live. So, yeah, it's all on the table.”

Judas Priest will kick off their 50th anniversary celebrations in Helsinki on May 30 and complete the first run of shows with a headline set at the UK’s Bloodstock festival on August 9.

They’ll then head out across the UK and Europe with Ozzy Osbourne on his rescheduled dates.

Aside from his work in Priest, Halford has also been writing his memoir and recently released his festive album Celestial.