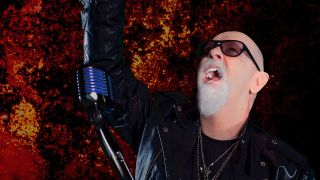 "Metal maniacs - as we call ourselves - are just as ready for the holidays as everybody else," says Rob Halford. "And what we’ve tried to do with this music is to reach out to as many of those metal dimensions as we possibly can.”

The Judas Priest frontman and official Metal God™ has a new album out, and it's a celebration of all things Christmas. In fact, in might just be the Most Metal Christmas Album Ever.

Featuring festive favourites like Away In A Manger, The First Noel, O Little Town Of Bethlehem and Good King Wenceslas alongside original songs Celestial, Donner And Blitzen, Morning Star and Protected By The Light, it's an album that'll look at home on any metal mantelpiece. Or in any kind of satanic stocking.

We asked Rob all about it. And because it's basically Christmas, he obliged.

What made you want to do a second Christmas album?

"I had a wonderful time making Wintersongs 10 years ago and it never really left me. I always felt that there was a little more to accomplish in that area of music, so it’s a joy to go back into that world. It’s another opportunity to spread some good Christmas metal cheer from the metal god!"

What is it in particular that you love so much about Christmas?

"It’s this beautiful, worldwide event, and especially when you’re a kid, there is this great, unquenchable excitement and energy. I love the buzz of it! But then on the day, it’s very calm, peaceful and reflective.

"I think everybody behaves differently – it’s as if the planet slows down. Everything seems to calm down, which I think is important because today everybody is screaming at each other!"

What are some of your favourite songs on Celestial?

"There’s a really adventurous track called Good King Wenceslas. For me it’s got the landscape and atmosphere like some of the big Judas Priest classics like The Sentinel, Sinner, Lochness… I love these moments where the band really stretch and show a tremendous journey within the song.

"With the original songs, I love Donner And Blitzen; it’s got a very metal edge to it. This isn’t a metal album in the purist sense, but it’s got me on it, and I’m the metal god!" [laughs]

And what’s your favourite Christmas song ever?

"Oooh. Probably Away In A Manger. The reason is because it’s making me think back to when I took part in a school Nativity play when I was about seven. I played one of the three kings, so that song has kind of stuck with me. Beautiful memories. Apart from the fact that it was a nightmare trying to keep the crown on; it kept falling off!"

Do you have any Christmas traditions?

"I’m Christmas tree mad. I put loads of Christmas trees up, way too many. I don’t know why… [pause] it’s metal! [laughs] If you’re a metalhead, you have to have more than one Christmas tree. That’s just the way I am: I love that side of it.

"I always put the trees up myself, I don’t let anybody get in my way – they could put the globe in the wrong place, or the tinsel, or the coordination could be incorrect or the colours not matching – so I have to do it myself. Which is a lot of fun! I love that side of it. I love the decorations and all of the sparkly flashy stuff. I’m like a cat!"

How many trees are we talking?

"Oh, and if I have guests coming over, I have two guests rooms, so there’s one in each guest room so that’s eight, and then I have one in my room. So we’ve got to nine. It could be more…

What are your plans for Christmas this year?

"I’ll be back in my home in Walsall around Christmastime, after I do Alice Cooper’s Christmas Pudding. I have a beautiful little house in Walsall – it can only manage about one tree, so I’ll have a bit of the Christmas blues!" [laughs]

"But I just want to be with family and friends, my brother and my sister. I’m looking forward to seeing my brother and nephew, and all my other friends, like Ian [Hill] and Glenn [Tipton, both from Judas Priest]. Everybody from around that part of the world, to try to come together for a quick Christmas kiss under the heavy metal mistletoe."