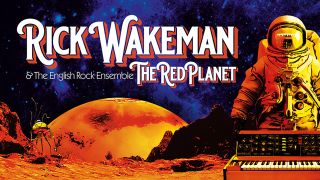 Rick Wakeman gets his very first look at a prototype finished version of his upcoming new album The Red Planet, observing lockdown of course, in a brand new video that has just been released and which you can watch in full below

"It's fantastic I love it," enthuses the caped keyboard player. "And this is truly the first time that I've actually opened the album to look at the inside. Now that is super cool! I remember when I was a kid having pop up books and I can remember when I was a teenager I had a pop up book that my dad confiscated but this is absolutely brilliant. Oh, this is so cool!  This is how albums used to be and should be for the future.  Nice one to all concerned with The Red Planet thank you very much indeed."

The Red Planet album sees a return to his progressive rock roots after having several hit piano-based albums such as Piano Portraits (2017), Piano Odyssey (2018) and Christmas Portraits (2019).

The Red Planet will be released in June on LP and CD, with the first 1000 vinyl units pressed on 180g red double vinyl, which will be signed and numbered and presented in a ‘pop-up’ cover.