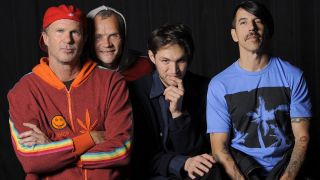 The Red Hot Chili Peppers have revealed the title track from 11th album The Getaway.

The follow-up to 2011’s I’m With You is launched on June 17 via Warner Bros. The band streamed their song Dark Necessities earlier this month.

Frontman Anthony Kiedis suffered a health alert ahead of a concert last week, and was later diagnosed with intestinal flu. Drummer Chad Smith later said: “His stomach was killing him – it was really scary. He’s a very strong man and he’ll be back better than ever.”

The Red Hot Chili Peppers are gearing up for a European tour, which ends at the UK’s Reading and Leeds festivals in August.