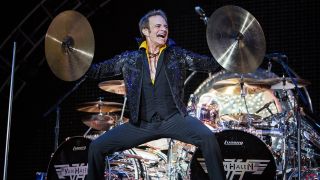 David Lee Roth is confident Van Halen will record a new album and tour in the future – but he can’t say when.

Van Halen’s most recent album was 2012’s A Different Kind Of Truth, which was their first since reunited with Roth in 2007. They wrapped up a North American tour last year and have been quiet since.

But the frontman is sure there will be more to come from the band.

On The Roth Show, he says: “It’s not like my career path is going to get altered. I sort of know what the next 10 summers are going to bring – Eddie Van Halen aside, those are ups and downs.

Roth stirred rumours that he was ready to quit the band when he released a solo track this year called Ain’t No Christmas. It includes the lyrics “Quittin’ while you’re ahead ain’t quittin’, and I’m quittin’.”