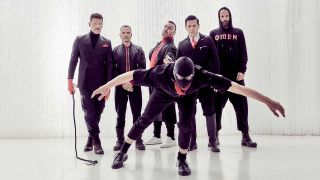 Rammstein have announced a UK date as part of their European stadium tour of 2020. In addition to the shows announced two weeks ago, they will also bring their fiery industrial hellscape to Coventry, playing at the city's Ricoh Arena on June 20. Tickets go on sale on Friday at 10am.

The band, whose self-titled album debuted at no.1 in 14 countries when it was released in May, performed at Stadium MK in Milton Keynes last weekend.

Metal Hammer editor Merlin Alderslade said of the show, "From the towering, industrial nightmare of a set to the endless jets of flame, plumes of black smoke, stunning light show and, yes, confetti, this was a show for the ages – Rammstein planting their flag loudly and once again confirming themselves as the biggest and best show in rock music."