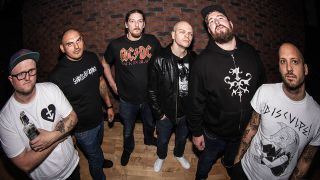 Raging Speedhorn are releasing a special live recording of their 20th anniversary show.

The Live In London Official Bootleg was recorded at the band's reunion show at London's Electric Ballroom on October 6, and will be released on cassette, CD and vinyl through Undergroove Records.

The show saw the original Raging Speedhorn lineup reunite for one night only, performing together for the first time in ten years.

"It was truly amazing to perform this show and play a set of all our old material," says drummer and founding member Gordon Morison. "When a fan sent me the recording he had done of the show, I knew we had to share it with the fans in an official capacity, so it's awesome to be able to see this actually get a proper release.

"As a kid I know most of us would spend hours in record shops hunting down bootlegs recordings of our favourite bands, so it's really nice to keep that bootleg tradition going. The show sounds fucking raw and exciting and we hope everyone will enjoy it!"

The raw recordings have been mastered by Dave Draper, known for his work with Ginger Wildheart and Terrorvision.

Live In London Official Bootleg is available on cassette now from Undergroove Records, with CD and  vinyl releases to follow shortly.